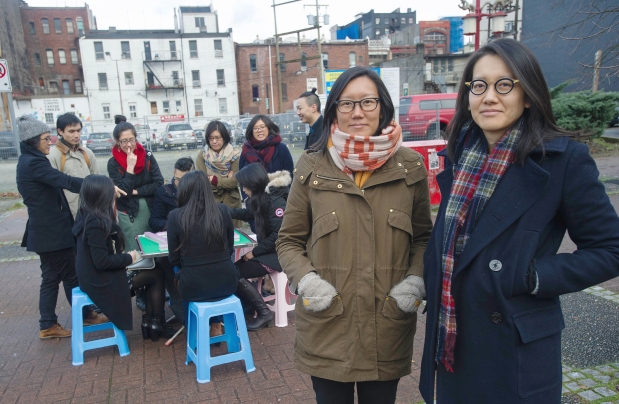 VANCOUVER -- A controversial proposal by the Beedie Development Group to build a 13-storey condo building on an empty lot in Chinatown has ignited opposition from a fresh set of organizers and volunteers.

“We wanted to flip the script of ‘Chinatown is dead or dying’ …. and focus on the positive things being done by youth in and for Chinatown,” says June Chow.

They are not only talking up their case against Beedie’s plans, but spurred by it to connect different voices in the streets and spaces of Chinatown.

Chow and her sister, Doris, for example, co-founded the Youth Collaborative for Chinatown and have been holding monthly mah-jong social events that bring together senior citizens with hipsters over a poker-like game. It’s a cultural activity that isn’t based on eating or buying, says Doris. She feels it’s part of keeping alive “the history of Chinatown and the contributions made by many Chinese-Canadians to this city and country.”

In some ways, they are also motivated by “fights for Chinatown” of the past, going all the way back to the strikes against racism in 1907 to the protests of the 1970s against a freeway, says Kathryn Lennon, another organizer. “We also want to broaden the discussion — it’s not just about one site — to say ‘what more can we do for this neighbourhood?’”

Their mah-jong sessions initially set out to “activate” public spaces in the area; the first few involved just a few tables set outside near Columbia and Keefer Streets on summer evenings.

Word spread and, at the last session in a Chinatown food court atrium on a rainy December afternoon, the organizers were greeted by a larger-than-expected turnout. With some participants arriving half an hour early to play, they hardly had enough tables. Eventually the place was filled with veteran players hovering behind newbies, shouting handy tips over the sounds of shuffling tiles.

“There is need to invest in the crisis of belonging in Vancouver,” says urban planner Andy Yan, who was at the event along with his boss, architect Bing Thom. “June and Doris pulled this off with a shoestring budget.”

The deadline for the public to submit feedback to the city on Beedie’s rezoning application is next week on Jan. 4 and this sparked other Chinatown youth efforts in December.

Over at the Carnegie Community Centre, Chanel Ly, a downtown eastside outreach worker who mainly serves low-income Cantonese and Mandarin-speaking seniors, this week debuted a short film she and her partner, Eliot Galan, made.

Called Hot Earth, it focuses on how elderly residents in the area feel about the plans for 105 Keefer. Their voices are otherwise “quite hidden,” Ly says, but the discussion is changing.

“We talk a lot about the impact of development, but it’s usually abstract. (This) has been a lot more concrete,” Ly says. “This is one site to fight for and the condo (building) has not been built yet, so it is a perfect critical moment to mobilize people with the site being in the heart of Chinatown.”

The Chows’ youth group, along with Kevin Huang at the Hua Foundation, which represents Chinese-Canadian youth, set out to talk directly with Chinatown businesses in order to compare their own findings with Beedie’s conclusion that only eight per cent of 144 businesses canvassed within a 300-metre radius of the site were opposed to the plans for 105 Keefer.

After four days visiting about 50 businesses along Keefer and Pender Streets, they found a much higher level of opposition, at 50 per cent. Some 40 per cent also told them they had no recollection of being approached by Beedie, which concerned the group enough to write a letter to the company and the City on Dec. 15.

Beedie executive Houtan Rafii was not available to speak with The Vancouver Sun on short notice ahead of Christmas and is out of the country now with limited access to email.

The company’s proposal follows condo projects on nearby Main Street in Chinatown being built by other companies, Solterra and Westbank, which the city allowed based on a 2011 neighbourhood plan for taller buildings.

Beedie bought its site at 105 Keefer in 2013 for $16.2 million. After its first proposal generated a mini-uproar last year, it revised it in October, designating 25 of the 127 units as seniors housing. It has also tried to minimize the bulk of its original design, adding details such as recessed balconies inspired by traditional buildings in Chinatown.

Despite this, some prominent voices have joined the brewing opposition in recent weeks. They include former premier Mike Harcourt, the city’s advisory Urban Design Panel, the Chinese Benevolent Association, which includes over 100 societies and clan groups in the area, and the Chinatown Historic Area Planning Committee (CHAPC).