Keisha DeCoste, Next UP Calgary Coordinator

Keisha (she/her) is our Program Coordinator for Next Up Calgary, located on Treaty 7 territory, the traditional land of the Blackfoot Confederacy, the Tsuut’ina, Îyâxe Nakoda Nations, as well as the Métis Nation of Alberta (Region 3).

Keisha’s work started with young people— with a bachelor’s in child, youth and family counselling, much of her early work centered around empowering youth voices and inspiring activism in young people. Her practice has included ‘boots on the ground’ experience working directly with children, youth and families in a compassionate, supportive and capacity-building manner.

Growing up in a low-income household and within the foster care system, Keisha is a trauma survivor and knows how trauma can color our experiences. She is passionate about creating trauma-informed spaces and believes strongly that through sharing our stories we can make connections rooted in positive common interests and create lasting change.

Selena joined genius as Executive Director in July 2018 and is an alumna of the first Calgary Next Up cohort (2010).

As an anglophone, Acadian-settler mother living in Alberta, Selena’s relationship with colonialism is complex. She believes that reconciliation is rooted in both an understanding of self and in collective community experiences. This is critical and personal work as she strives within her own communities to decolonize what it means to be part of the Acadian diaspora.

With almost 15 years experience in the non-profit sector, Selena has coordinated national and international workshops, collaborations, and open spaces that explore responsible ally-ship, grassroots leadership, and youth agency. She is Co-Chair of the Board of Directors of Canadian Roots Exchange, and has been a community facilitator with the 4Rs Youth Movement.

Selena currently lives and works on Treaty 7 lands. She loves board games, animals, and chasing after her vivacious toddler.

Manuela Valle-Castro is our Program Coordinator for Next UP Saskatchewan, located on Treaty 6 Territory, homeland of the Cree and Metis people.

Manuela has an incredible history of grassroots activism in Chile and Canada with a flair for facilitation and encouraging thoughtful discussions about social justice with youth. She has achieved a PhD in Gender, Race, Sexuality, and Social Justice, along with her involvement in many different organizations including Girls Rock Camp Saskatoon and Riversdale Community Association. Manuela has held teaching positions at the University of Saskatchewan, and brings with her experiences and skills rooted in feminism, conflict mediation, mental health, poverty, environmentalism, Indigenous topics, and many more such subjects. She is also huge fan of 'zines!

Manuela impressed us with her analytical and compassionate perspectives, positive energy, and wealth of skills and hands-on experiences. We are extremely excited for what Manuela will bring to the program and the future Next Uppers who will have the opportunity to grow and develop their leadership under her guidance!

You can reach Manuela by email at sask@nextup.ca 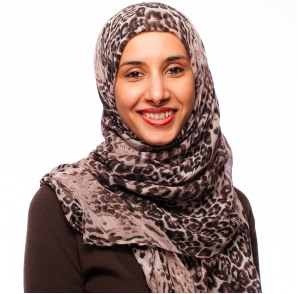 Introducing Rana Hamadeh - Program Coordinator for Next Up Ottawa

We are happy to announce that Rana joined the ranks of Next Up Coordinators in the Fall of 2014.  She's coordinating Next Up's third cohort in Ottawa.  Here's Rana, in her own words:

I am an activist, student, artist, and writer. I consider myself a community organizer, both locally in Ottawa, and in my second home, Palestine.

While working on my BA in human rights and law at Carleton University, I became interested in organizing for students' issues, from food poverty to reviving the fight for accessible tuition. I am working for the establishment of an ethical investment policy with Students Against Israeli Apartheid (SAIA), and I sit on the board of the Ontario Public Interest Research Group (OPIRG), a social and environmental justice resource centre. In Palestine, I worked as an independent journalist and with grassroots collectives, training new activists in nonviolent direct-action.

I am interested in creating spaces where oppression and colonization can be addressed and deconstructed, for the betterment of our movements and ourselves. I always contend that change is possible when we know which buttons to push and am happy to be working with young change-makers through Next Up!

Rana Hamadeh is a Palestinian-Canadian activist, artist, facilitator, and writer based on Algonquin Anishnaabeg land in Ottawa. She immerses herself in grassroots community organizing, both in Ottawa and her second home, occupied Palestine.

Alongside coordinating Next Up Ottawa, Rana currently runs peer support programs for refugee youth and women through an Ottawa non-profit.

While completing her BA in human rights and law at Carleton University, Rana became interested in organizing for students issues, from food poverty to accessible tuition. On campus, she became a core member of Students Against Israeli Apartheid (SAIA) and joined their battle for a socially ethical investment policy at Carleton. She also continues to sit as a Board member of the Ontario Public Interest Research Group (OPIRG), a centre for student organizing on the lines of social, environmental, and economic justice. In Palestine, she worked as an independent journalist and within local direct-action activism collectives.

Rana’s passions are informed by her experiences: arriving in Canada as both a refugee and a settler; growing up in the Palestinian diaspora and resisting exile as an adult; and living in Canada as a racialized Muslim woman. She is interested in creating spaces where action is informed by decolonization.

Seth Klein, Co-founder & Instructor with Next Up

Seth was hired to open the CCPA’s BC Office in 1996. Under his direction it has become a prominent and widely respected source of public policy research and commentary. Seth’s research deals primarily with tax reform, welfare policy, poverty, inequality, and economic security. A social activist for over 30 years and a former teacher, Seth holds a BA in international relations, a BEd from the University of Toronto, and an MA in political science from Simon Fraser University. Seth is a co-founder of Next Up. He is the former co-chair of the BC Poverty Reduction Coalition, an advisory board member for the Columbia Institute’s Centre for Civic Governance, and an advisor to the Living Wage for Families campaign.