While in Next Up, I applied for and was accepted to Simon Fraser University’s Masters of Public Policy program. I was attracted to the idea of taking the grassroots knowledge and advocacy skills that I was gaining in Next Up and coupling them with an understanding of how and why governments make the decisions they do.

I am now in my second year of the MPP program, and have started work on my thesis. My research focuses on why, even after almost one hundred years of women being able to vote and run for office in Canada, there are still so few women in politics today. Specifically, I am focusing on how to encourage more women to run for office at the municipal level.

Previous research has identified a number of likely barriers for women entering politics. Among these are the often steep costs of a campaign, the expectation that women will still do the majority of domestic work, and the political culture itself. The municipal level is generally seen as a more friendly, less competitive level of politics, so many people conclude that women should fare better at this level. However, in Canada today there is actually a lower proportion of women Mayors and City Councilors than of MLAs or MPs. This led me to believe that some barriers for women still persist at the municipal level.

I’m excited for the next phase of my research: to interview women Mayors and City Councilors about their experiences deciding to run for office, during the campaign period, and while in office. I also plan to conduct case studies of cities that have actively encouraged more women to run for office through campaign funding incentives, training programs, or other options. In the end, I will present policy options and one ultimate recommendation for how municipalities can encourage more women to run for municipal offices.

My hope is that my findings will be useful in that some cities will take up my recommendation. But moreover, I hope my research will further the important conversation on why such a gender gap persists in Canadian politics. As a society we are ever closer to achieving gender equality, but the political arena still needs serious attention. 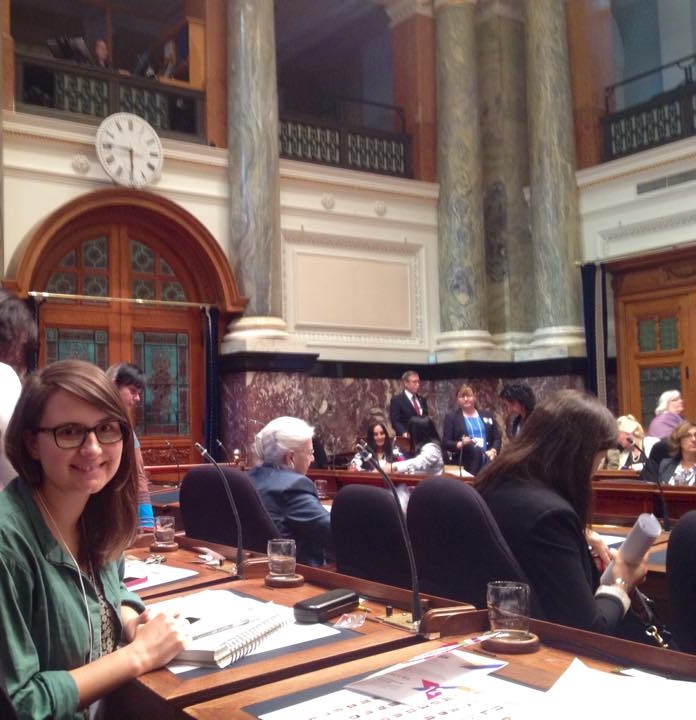 Photo: Halena inside the Legislative Chambers at the Legislative Assembly of BC in Victoria, at the Women’s Campaign School held by the Canadian Women Voters Congress. This event focuses on providing women with campaign skills to bolster their capability and confidence to run for office.