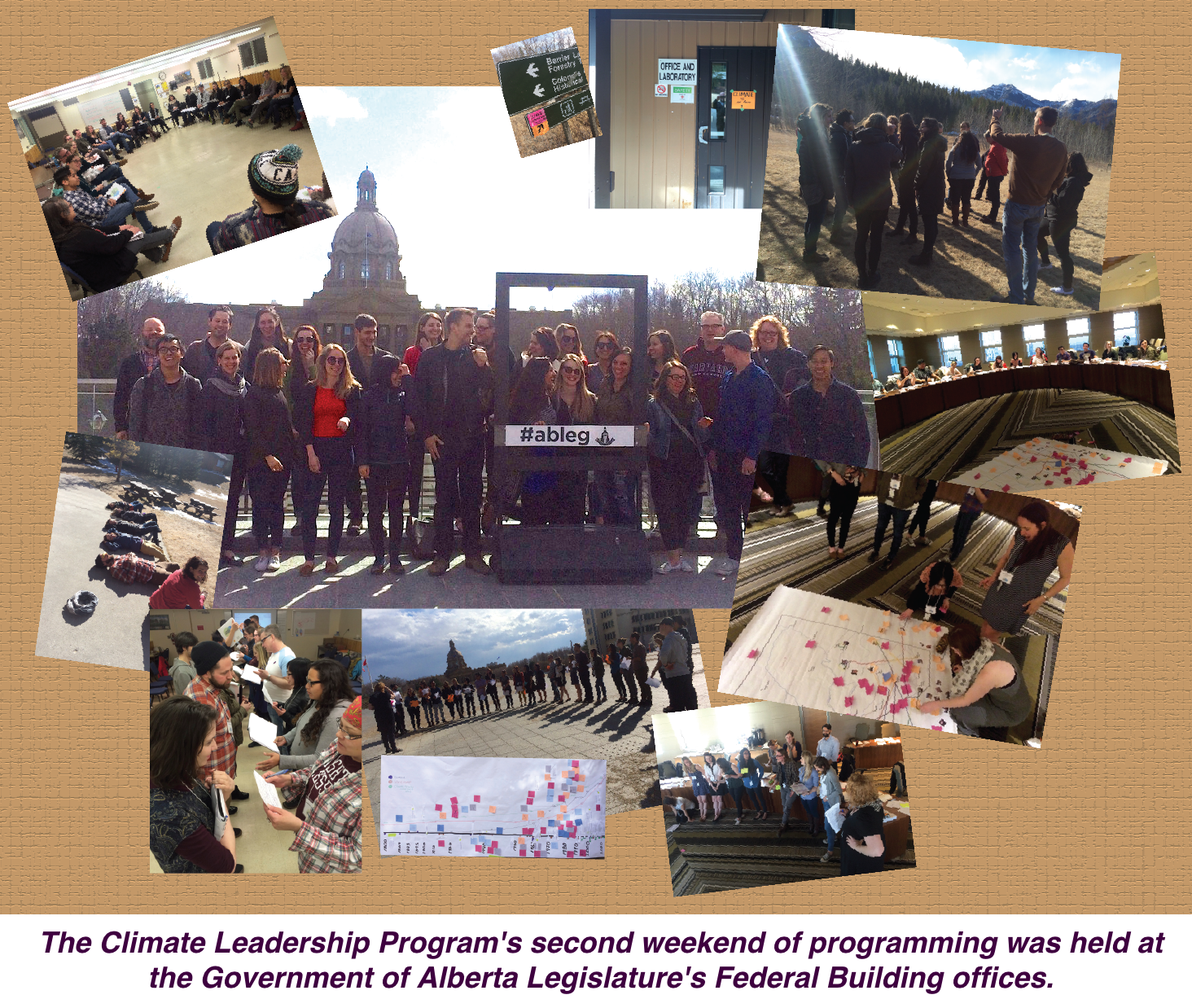 In Vancouver we’re piloting a three-day Community Intensive from May 6th-7th that is now accepting applications. We’re also holding a one-day youth caucus on the Trans Pacific Partnership along with the Council of Canadians that takes place on April 16th in Vancouver. In Alberta, the pilot version of our new Climate Leadership Program is well underway with participants coming from seven Albertan communities. In addition, we're excited to announce that Regina will be the location for our newest seven-month Next Up Leadership program! The application period for the new Regina program will begin later this summer for a fall programming start. All of our new programming has grown from both increasing demand for the leadership training that we provide and our own desire to offer differing program formats that can make our work accessible to more people.

I want to thank you for the ways that you support our work: whether through presenting at sessions, mentoring participants, providing volunteer opportunities, joining us at events and through personal and organizational donations. It’s because of your support that we can offer our core leadership programs and the new versions on offer this year. You’ve read this far, so I’m confident that you agree that the work being done in the Next Up leadership communities is vital, and it’s my hope that this will inspire you to support us in all the ways that you can.

Thanks again for your interest and involvement with Next Up Leadership.

Also happening in and around our network:

Next Up BC 3-day Spring Leadership Intensive

Next Up BC is growing! We’re excited to announce our first ever Spring intensive program, happening May 6-8, 2016, in Vancouver. We’ve taken the very best of our annual programming and we’re bringing it to you over three intense days! You’ll have the chance to meet other young activists and community leaders working on environmental, social and economic justice. We’ll share theories and skills around change making, and explore what progressive leadership can look like.

Applications are due April 22 at 4pm PST. Click here for more info about the program and how to apply.

On April 16, we hosted a  Next Up community event on the Trans-Pacific Partnership (TPP), that we're hosting in collaboration with Check Your Head, KPIRG, and the Council of Canadians. It's was great opportunity to learn about the Next Up program, meet others in the Next Up network, and learn more about why the TPP is so disastrous.

This young activist caucus was a part of the Council of Canadians' day-long teach-in held in Vancouver on Saturday, April 16th. The caucus gathered folks to brainstorm how students, young and precarious workers, young artists, and other young people can get organized to stop the TPP. We hope this will be an important first step in building collective power against the Trans-Pacific Partnership and other harmful trade agreements.

We also gave a short presentation, "How to talk about the TPP," empowering ourselves to educate others on its harms.

If the TPP is ratified, the rights of corporations will be strengthened at the expense of the public interest, with grave implications on food safety, health care costs, and privacy protections.  Hosted by the Council of Canadians, Our Common Struggle, Making the Links - A Teach in on International Instruments of Corporate Power: TPP, CETA, FIPAs & NAFTA will be an opportunity for people across metro Vancouver to learn more about the dangerous implications of free trade.Lunch is provided for those attending the teach-in, but please RSVP. The teach-in is a free event.

Next Up Edmonton grad, Claire Edwards, spent a last Fall as an intern with NARAL Pro-Choice America in Washington, DC. She followed this up with an internship, Union Semester, in New York City and is currently with SEIU 1199's Education and Leadership Development Department. She writes: "Next Up really was a huge part of my development as an activist, and without it I wouldn't have had these opportunities.  When I get back to Edmonton this summer I plan to use what I've learned about the labor movement and reproductive rights in fighting to make Alberta a more fair, just, and equitable place to live." For more about Claire's experiences in her own words, go to to the stories section of our website.

Grad Chris Chang-Yen Phillips was recently in the news because of his new position as the Historian Lauriate of Edmonton. You can read the CBC news story here.

Update from the Climate Leadership Program

Next Up just finished it’s second full weekend session of its’ new Alberta-based Climate Leadership Program. The program began in March and will run for another three full weekends, ending in June 2016. We have 26 participants from seven communities, reaching from Pincher Creek in the south to Saddle Lake in the North. Thus far we’ve met in Kananaskis Country and the Edmonton Federal Building, and will continue to gather at three more locations in central Alberta. Our participants come from a wide cross section of Albertan society that includes folks from First Nations, labour, education, policy, municipalities, the energy industry and regulators.

We built this pilot program (with the support of the Alberta EcoTrust Foundation and the Sisu Institute) to expand the leadership opportunities for climate action in Alberta. It’s also our first program with a weekend residence format, and the first with a peer accountability partnership as a core component. The program will conclude with a fall conference to review and support progress on the participants’ action projects and plans.

continued in the CLP blog

Fundraiser alert!  This April Next Up Ottawa will team up with local researcher, professor, and author, Jacqueline Kennelly, to launch the paperback version of her book Citizen Youth: Culture, Activism, and Agency in a Neoliberal Era.  Tiffany Rose, founding member of the Ottawa Network of Peers Advocating Harm Reduction (ONPAHR), will join other in discussing issues pertaining to youth activism, citizenship education, and the state of democracy under neoliberalism.  We welcome Next Up alumni and friends to join us at this event on April 18, 2016. Proceeds from the event will go towards Next Up Ottawa, ensuring that it remains a staple in the community. Read more details about the book launch event here.

And as part of these preparations, in February 2016, NU Sask hosted a thought-provoking and invigorating conference on "Building Skills for Social and Environmental Justice" on Treaty 4 Territory (Regina). Supported by the keynote address, on the LEAP Manifesto, from Seth Klein - Next Up co-founder and Director of the Canadian Centre for Policy Alternatives BC office - the weekend's events fostered great interest from the public and provided a dynamic opportunity for local communities to learn more about Next Up. Read all about it here.

Climate Justice Saskatoon participants, Next Up alumni Rachel Malena-Chan and Andrea Cessna along with current NUpper Justin Fisher, have been directing their effort toward a media project that highlights issues surrounding climate justice.  Check out their 3-5 minute tutorials, such as this one called "Individual Choices vs. Systemic Change." All of their videos are aimed at bridging the gap between active supporters and those who may not know how to get involved. Read more about Climate Justice Saskatoon and Next Up's involvement and find links to more of their videos on our website.

Learning about Reconciliation, Redress, Remembering, and Resilience through the Human Library

On March 21, NU Sask brought people together for the Human Library event. Stories ranged from recent incidents of racial profiling and police brutality, to the legacies of the 60s scoop and Japanese-Canadian internment, and the discrimination faced by sex industry workers, among others. Readers participated in six rounds of “borrowing” at the human library, meaning they got to hear six of the fifteen stories. In the anonymous feedback they left on flip charts at the end of the night, one participant said the event gave them "a more meaningful definition for reconciliation." Read more about this gathering here.

Our very own Nadia Kidwai (Coordinator for NU Winnipeg) has been nominated as one of CBC's Future 40! In addition to her work with Next Up, Nadia is Chair of the Manitoba Women's Advisory Council, advising the Minister Responsible for the Status of Women, and a council member of the Immigration Partnership Winnipeg. She also works for the Canadian CED Network. You can find out more about Nadia and her work in and around Winnipeg here.

A day in the organizing life of Christopher Clacio, NU WPG 2015-16 participant

Current Next Up participant Christopher Clacio, spends much of his time organizing in the North End of Winnipeg with Aboriginal Youth Opportunities (AYO). He is active in many events in and around Winnipeg, and in 2014 he ran as a candidate in his local school division, Ward 2 of Seven Oaks, as one of the youngest candidates in the whole city. His platform had 4 pillars: political engagement, bullying awareness, mental health, and community volunteerism.  Read more about Christopher's work and activism here.

Last but not least, with the end of winter in sight, springing forward gives us a little more light in the day and also presents new opportunities for mentorship, training, and inspiration this year.

Please consider donating to Next Up. With our Climate Leadership Program going strong in AB; the NU BC Bootcamp starting up this Spring; and looking ahead to Fall and the beginning of the NU Regina Program, we have a lot to be excited about this year and much organizing to do.  We hope you'll become part of our growing network of supporters for youth empowerment!

Thank you for reading. Please share this with those you feel would like to learn about Next Up.