Recent graduate of Next Up Ottawa, Gloria Song, posed the question, "what does a musician look like?" in a poignant piece for Ottawa Beat, a local arts newspaper. Written and published during Asian Heritage Month, Gloria's article explores her own experience as a racialized woman and frontwoman of the indie-rock band Scary Bear Soundtrack. Gloria also offers a list of ten Ottawa-based acts featuring musicians of Asian descent that you should check out! 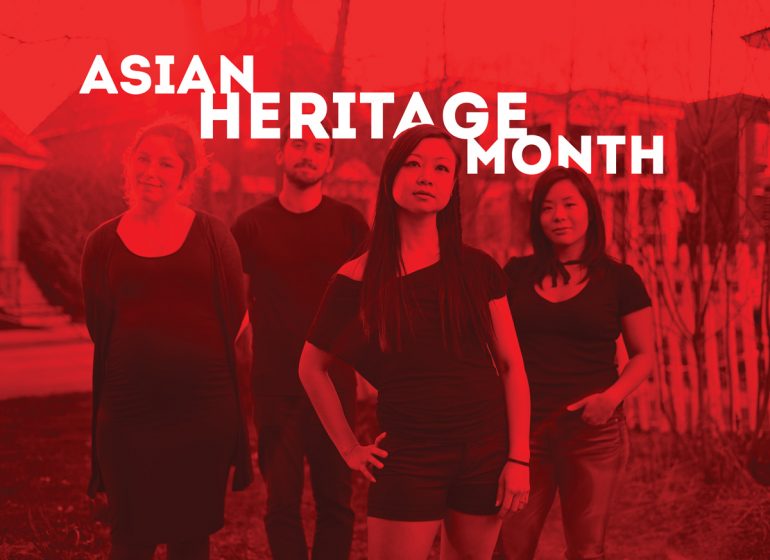 Asian Heritage Month: what does a musician look like?

I had just stepped outside to grab a bite to eat after doing soundcheck with my old band, but now the bouncer wasn’t letting me back into my own show.

“The doors haven’t opened yet,” he told me gruffly. “Only the bands are allowed in.”

“Really?” he said, not moving. “You don’t look like a musician.”

But what does a musician look like? This ran through my head after that encounter. As I continued to scan the faces in music videos on TV, and on stage at festivals and shows, I realized the answer: Musicians don’t look like me.

I’m the frontwoman for the Ottawa-based indie rock band Scary Bear Soundtrack. I was born in Canada to my Korean family who immigrated here during the 1970s. My mom put me into classical piano lessons when I was five. I know, I’m a living Asian stereotype.

I dreaded practicing the piano, but I loved making up music. Even after quitting piano lessons for the guitar during my teens, I spent hours writing songs in my bedroom.  I ached for opportunities to share my music, but back then it was tough for an aspiring Asian teenage girl in Kanata to rise up to rock stardom. There just weren’t that many Asian musicians on stages, the radio, or Much Music, and there still isn’t.

Boys at school wouldn’t let me into their bands because they didn’t care for “the girl sound.” Because of the way I look, people assume they won’t like my sound. There was a booming all-ages punk scene in Ottawa at the time, but living in the suburbs with a strict immigrant family, I wasn’t allowed to go out at night for fear it might interfere with my studies.

Since opportunities didn’t fall into my lap, I did the music thing on my own. As a teen, I recorded my own full-length album in the basement and put on shows for my stuffed animals in my bedroom. Eventually I realized there was nothing stopping me from starting my own band and Scary Bear Soundtrack began about seven years ago.

Although our lineup has changed over the years, it was important to include female and Asian musicians—I wanted to give opportunities to the kind of folks that those boys in school and the bouncers at the bars would dismiss as not appearing to be real musicians.

I tell these stories not because I want to complain but to show how social exclusion can take place even unintentionally. Unless we change our notions of what an indie musician looks like, people will keep feeling like they do not belong and we will never discover the amazing music talent and unique artistic perspectives that remain hidden in Canada.

There is still a long way to go, especially at guitar stores where store clerks assume I’m just waiting for a boyfriend or at venues with condescending sound technicians. I still don’t “look like a musician” with my relatively conservative appearance and reserved personality.

What people don’t realize is that our mere presence in the music community is a form of rock-and-roll rebellion: both against the restraints of my conservative Korean cultural background, and against a North American conception of what rock musicians should look like. I’ve given up on moulding myself to fit a white male notion of rock musicians because I will never succeed at this. My insistence on inserting myself in a space where I have been repeatedly told I don’t belong is my act of rebellion.

Things have gotten better. We’re so pleased that the music communities in Ottawa have expressed a public commitment to more diversity and inclusivity. So how can we keep this momentum going?

First it means being willing to broaden our understanding of what musicians look like. Maybe that little Asian girl in her church clothes wandering through the guitar section isn’t trying to find a gift for her boyfriend. We all have our biases, and it’s scary to explore them, but that uncomfortable feeling is okay because it’s the first step to changing it.

We need to keep creating opportunities for more voices in our community. Let’s keep supporting great initiatives in Ottawa to address some inequalities, including Girls+ Rock Ottawa and the DIY Audio Tech workshop for women. Let’s make sure we reach out to communities beyond just our friends. And let’s directly support Asian-Canadian musicians, by checking out their Bandcamp, going to their shows, buying their music, following them on social media, and generally letting them know we see that they exist; they are not as invisible as they feel.

Finally, and most importantly, we must always be strive for an intersectional approach. It’s about making sure we include folks who are not cis-gender; that there are also non-alcoholic spaces to play and listen to music for folks that cannot or don’t want to hang out in bars; that there are physically accessible music venues for folks who may not be able to attend a show where the bathroom is at the top of the stairs. It is our duty as humans to constantly listen and educate ourselves about other perspectives about which we may know less. Just imagine the interesting stories other folks in Ottawa would have to share, if only they had the support, the resources, and the opportunities.

Ten Ottawa-based acts featuring musicians of Asian descent that you should check out (with disproportionate representation from the post-rock genre, because clearly Ottawa needs to host a post-rock festival for next year’s Asian Heritage Month, am I right?)

My Dad vs Yours

I Spell it Nature

No Mistakes in Space